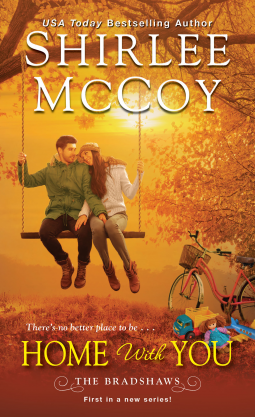 HOME WITH YOU is the first book in the Bradshaws series as well as the first book I’ve read by Shirlee McCoy but it won’t be my last. Once I started reading, I was emotionally invested in all of the characters and what they were going through. Sullivan Bradshaw finds himself taking care of his brother’s six children since his brother died in a car accident. Their mother is in a coma and these kids have no one except for him and his two brothers. The kids are all adopted and Sullivan isn’t the only one carrying around some baggage. Rumer Truehart answers a help wanted ad for a housekeeper and basically, a jack of all trades. Poor Rumer, her heart and her life will never be the same.

HOME WITH YOU is filled with friendship, forgiveness, family, mystery, humor, and romance…

2 thoughts on “REVIEW:HOME WITH YOU BY SHIRLEE MCCOY”