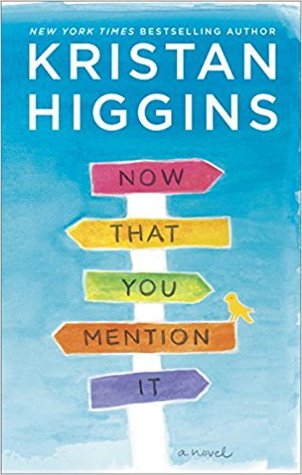 “Now That You Mention it” is my second Kristan Higgins novel and I thought it was a fantastic read.

After being hit by a truck, Nora Dr. Nora Stuart, a gastroenterologist at Boston City Hospital is certain she’s heading towards the light… “I’m dying…this time I’m really going to die”.

The evening had started off well for Nora. She’d even saved a life. But then the ER explodes with action as her doctor boyfriend spectacularly saves a man suffering from a gunshot wound. Nora can’t help but be awestruck as she watches his heroics in the ER. Afterward, she hopes they will go home together to talk about their day but instead finds herself offering to get pizza for him and the rest of the staff.